Today I have Olivia Night visiting for a quick interview. Her new book, Seduction in Sierra Leone, just released in August, and Olivia was good enough to share a bit about her writing process and to catch a couple of left-fielders as well. 🙂

I love romantic suspense. Did you have a hard time balancing the two?

I have been an avid reader of romantic suspense so I went into writing Seduction in Sierra Leone with an idea of how much suspense should be intertwined with the romance. I have read books where there is more suspense than romance and I found I didn’t grow attached to the characters. Conversely, I’ve read books that had more romance than suspense and in those cases I was never really “hooked” to the book.  I hope I did a good job at balancing the two. I love my characters and it was exciting for me to discover the story as I wrote it.

Sierra Leone is such an interesting and unusual setting. Do you have firsthand knowledge of Africa? How did you decide to place your characters there?

Africa is at the very top of my bucket list. I travel, each year, with a close friend to a different place. We have plans to visit Africa in 2018 (it seems far off but I am a HUGE planner). When I was younger I wanted to join the Peace Corps and go to Africa in that capacity. I went as far as completing the application. But I never hit submit. I have a really hard time taking risks and that was a huge one.  So it’s no surrpise to me that when Aislinn popped into my head she was a relief worker in Africa. (She also loves Coke’s and Dean Winchester, so she’s pretty awesome in my opinion)

I didn’t really “place” my characters there. Brandt and Aislinn came into my head pretty much fully formed people. I just had to write down their story and fill in the blanks. 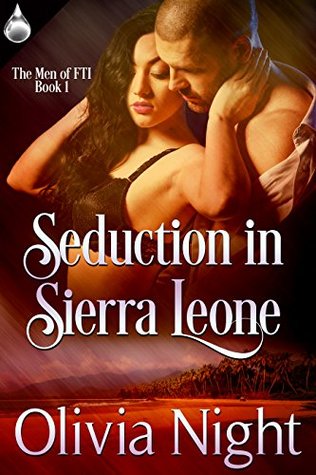 Do you have any interesting writing quirks?

I don’t know if it qualifies as a “quirk” but my writing process is more writing down what already exists in my head. In all three (and more recently four) books that I am currently writing the characters just kind of show up and say “Here I am! Write my story!” So I don’t have these thought out and planned ideas, my characters and their stories just kind of show up and I write them. I also listen to music for inspiration. Each character has a different “sound” and when I need a push I will sit for a while and just listen to the music, and the music only, for a while.

Neither – something with dark chocolate.

No competition- ketchup all the way.

If I only was allowed to drink water and one other beverage for the rest of my life I would forsake wine and embrace my beloved coffee. I’m a coffee-aholic.

What are you currently working on?

I’m working on a few things. I am finishing up Book 2- Seduction in Seville and am halfway through Book 3- Seduction in Scotland. I also am working on a second series (currently untitled which will be a four book series. I have written about thirty pages of book one in that and have jumped forward to book four and have that one pretty much outlined (partly in my head, partly on paper and partly on my iPhone notes app). I can’t wait to get all of these stories out on paper. I have this fear I will lose them somewhere in the recesses of my mind if I don’t. . The second book series will take place in Asheville, N.C. and starts with a tale of love and loss that makes even me feel sad for what the characters have gone through.

What is your favorite quote or catchphrase (can be from your writing or someone else’s)?

“You’re only given a spark of madness, you musn’t lose it.” Robin Williams

I have had this as part of my email signature for almost ten years and I’d like to think that when people see it they either smile or wonder what madness I am hiding….

In the mangroves of Sierra Leone, two strangers raised a world apart find themselves inextricably connected. Seduction in Sierra Leone, the first in a series of three novels, is a fast-paced tale of murder, lust, and love that transports the reader to a foreign and mysterious world of danger.

Aislinn Salameh, an American relief worker, is searching for purpose in her self- imposed lonely world. The stranger who enters her village on a blistering hot day looks more animal than man. She knows she should stay far away but can’t stop herself from being drawn to the mysterious man.

Brandt Fairlane is a man haunted by the sins of his past. Detached from others, Brandt has spent his life alone. His line of work is too dangerous for the luxuries of love and family.

When Brandt sees Aislinn and her haunting eyes, he knows he must possess her. But when Brandt’s past comes back from the dead and Aislinn is caught in the crossfire, it is up to him to keep her safe. In order to survive, they must learn to rely on one another. As they run for their lives, the heat between them becomes undeniable. Now, Brandt must not only protect Aislinn from a madman committed to stealing her away but he also must protect her from himself. Because if Brandt steals her body and her heart, he’ll never let her go.

Together, they watched the truck, a far better model than either had seen in their time here, tip and tilt as four men emerged. Aislinn couldn’t see any of them very well, though she could tell they were all very large, muscular men, all in different ways. One was short and squat, and one was short and lean and looked as though he really needed to eat. The other two were tall. Those two were muscular and looked more dangerous than the others. Perhaps it was the serious look on their faces, as if they had never smiled. But one was more muscular than the others. He was the tallest in the group. And he was really, really easy on the eyes. And as if he sensed her watching him—okay, staring—he turned his head and looked directly over at her.

His face was blank, his eyes unblinking. He looked across the short distance at Aislinn, apparently not even noticing that Geoff was standing in front of her. From the distance between them, his eyes seemed to be charcoal gray, a color she had never seen on a person. Animals yes, people no. His skin was tanned, and there was a slight sheen of sweat, giving him a sort of healthy glow. His dark black hair was cut short, but not in a military fashion that had that silly flat surface at the top. No, there was just enough to run her fingers through. His legs were huge, like tree trunks that made their way up to a tapered and slim waist. His chest flared back out to meet his thick neck. Veins stood out on his arms as he picked a bag up from inside the car, all the while staring at her. She fixed her eyes shamelessly at his full lips that were a dark pink, a color you normally didn’t see on a man. His nose had been broken before, judging by the uneven placement on his face. The rest of his face was perfect. Perfect angles, perfect mouth, perfect eyes.

She came back to his eyes and realized she had just, very slowly, given this stranger a full-body perusal. He didn’t offer a nod, or any other type of greeting; he just kept looking at her. She felt herself blush. And then, suddenly, he turned. Brima, the town elder, was approaching the men—quickly for an old man—with a broad smile on his face. Brima rubbed the man’s chin, a traditional Mende greeting, and, as was customary, the man did not return the gesture as a symbol of acquiescence to the elder. Then they both smiled and shook hands. The muted tones of their conversation drifted over to her as they walked to the elder’s home farther up the path, leading away from the road.

Olivia Night, a fictional character herself, has always been an avid read and writer. She found the romance genre in college and has never been able to get enough. One sleepless night, the main characters of Book One in her Seduction series sprang from her head fully formed. They demanded she tell their story; so she did. As they revealed themselves, so did two other intriguing characters. Those characters convinced her to give them their own books because their stories were worth telling too. And so Olivia suddenly became a romance author. When Olivia is not writing, she has the best job in the world, which, too, will remain a secret. In her free time, she reads, write, runs, or is, most likely, out emulating Buffy the Vampire Slayer. Olivia lives in one of the most diverse and vibrant cities in the U.S.—Baltimore. She lives with her cat, which she is convinced was a gladiator in his past life. Olivia plans to continue being awesome at this thing called life. Really, that’s her only goal.