I bought some adorable outdoor fabric last year to re-cover my super old, super skanky outdoor chair cushions. I figured, $50 for fabric sure beat $30 per new cushion. Have sewing machine, will create shit.

But, in an effort to clear plates and be uber-productive (sort of), I busted that shit out the other day. 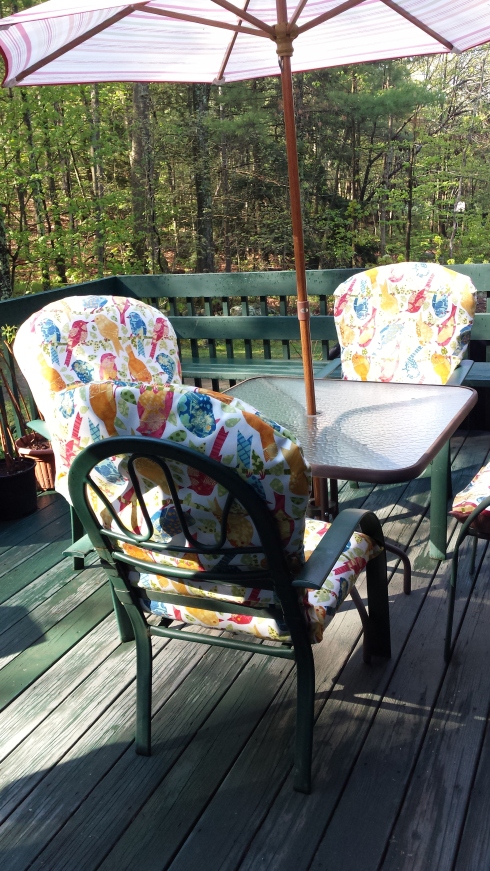 Full disclosure: I made one cushion with the birds upright, and then cut my remaining fabric after downing a bottle of Saki, all the while telling myself to be sure not to cut it sideways. Yes, the others are all upside-down (and I now realize there was some drunken photography going on). Also, I miscalculated my yardage and ended up short. I used a red outdoor upholstery fabric I had from a project I did at the Boston house and used it for the back of one cover.

Okay, so I won’t be selling my sewing wares on etsy anytime soon (ever), but you have to admit, they look way better than the originals!

How I Made My Killer T-Shirt Skirt

I don’t mean to toot my own horn…wait…actually, I do.

I’ve had this Danzig concert T-shirt since I saw them with Metallica back in high school.  It is one of my favorite concert T’s–thrall demonsweatlive on the back (amazing CD, BTW) and the old devil skull over a cross on the front.  It’s dark. It’s delicious. It’s freakin’ Danzig, man.

It’s also a boxy concert T, and therefore relegated to pajama duty.  Or at least, it was…

A few months ago, I saw my cousin’s wife wearing a T-shirt-turned-skirt and that kicked my plan into gear.  I didn’t try it until today, because I was a-scared of a-screwin’ it up.

But, lo and behold, I created a KILLER SKIRT!

Here’s what I did:

At the neck opening, cut along the shoulder seem. When you get to the sleeve, keep cutting in an imaginary straight line.  Do this on the other side. This is going to be the bottom of your skirt, so whatever picture/words you have on it will be upside down. It’s okay. It’ll still look cool, I promise.

I have a serger (as I used to make cloth diapers for my babies because a little part of me is crazy hippy—-plus I could have skulls and crossbones and Scooby Do catching their pee, and hand-knit wool pants in rainbow colors on top.  Don’t judge me—join me. Cloth diapers are the coolest.)

Anyway, so I serge from the end of one sleeve all the way across, leaving it jagged as it was cut because it looks wicked awesome that way. Then I did the same on the back.  The sleeve holes were cuffed and sewn (probably by Glenn Danzig himself) so I didn’t serge over them, but you could if you want.

If you don’t have a serger, you can use a regular sewing machine on a zig-zag stitch.  You could also leave it raw, since T-shirts are a tight knit and won’t fray.  The most they’ll do is curl depending on your cut angle.

I was planning on putting elastic on the top originally, but I didn’t love the idea. I decided to turn it inside out and sew along both sides a few inches in to make the opening at the top fitted, and reduce some bulk at the hips. It worked, and stays up without elastic.  Just measure it to your body to decided how much to sew.  You can always run a tighter bead inside your original to get it just right.  I may go back and make mine a bit tighter later, as I can see it will likely stretch over time.

And that’s it!  I can’t wait to make another one with my old Nirvana and Pearl Jam T’s!  I’ll be wearing these puppies to concerts all summer long!

Special thanks to Lefty for the mad photography skills! xoxo