Today I have Houston Havens visiting my blog with an excerpt from her recent release, Phantom Desire. Thanks for stopping by, Houston!

It’s awesome to be here with you on your blog today. Thank you for having me. I hope to entertain and intrigue your viewers with my latest book in the Psychic Ménage Series. 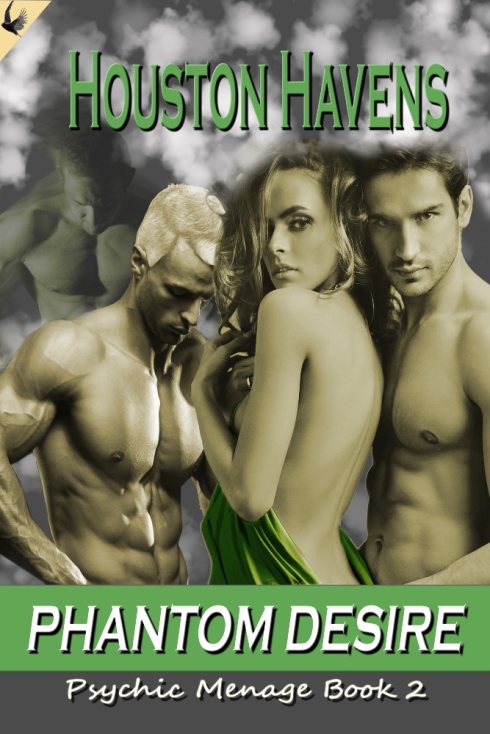 Excerpt: She’d developed a liking for spanking when she was sixteen. By chance she’d gotten in trouble at the Mind Traveling School for making a travel without permission of the location and was taken to task by the faculty head. He happened to be a very distinguished looking man but sexually deprived like most Dirt Dwellers.

The moment she entered his office he demanded she bend over and slowly remove her underwear. He positioned himself so he could see her exposed pussy. In that moment of brief eye contact between them she felt the power she had over him. She wasn’t the victim, he was, and that changed the experience for her.

To this day she could remember how he squirmed when she separated her legs, bent over, and shifted her weight from side to side making his hungry stare sway with her ass movement. When he demanded she lay across his lap, she purposely raised her skirt so

his hand would meet her flesh. She did it to weaken and torture him further. At first her purpose was to get back at him for punishing her for something so simple. On subsequent times, she did it to get rid of her own sexual frustrations. The day he came looking for her with some made-up charge against her was the day she knew he was at her command. By confession, she decided how many times he’d swat her rump and if she’d let him get an erection or not before she promised to be good.

Because everything was monitored, the faculty head never dared stroke her pussy, but he sure did a lot of touching, bumping and resting of his hand over that area while scolding her.

She ended up getting into trouble a lot, and it was the reason she wasn’t promoted like Fay had been. Unknown to her at the time, to cover his ass the bastard had filed bogus reports of her disobedience so those watching couldn’t charge him with unlawful sexual stimulus.

“Go on. Ask me.” Andonis’ voice drew her back from her memories.

She just didn’t have to guts to say it. They’d think she was mentally sick. After all Andonis already used a soft whip on her breasts and nipples, if she requested more punishing behavior Nikias was sure to think she was a freak. Andonis, well, he was like the faculty head, he was getting off on it just as she was. Her gut told her he was very much like Ortello. Andonis instinctively knew she liked the wild passion of tempestuous sex. Even now, the devilish twinkle of comprehension in his eyes told her he knew she was looking for a strong outlet like a spanking to get her off at the highest level.

Without pushing her to voice it, Andonis handed his brother a knife. “Cut her loose. Cut only the green and blue ropes. Leave the red bindings on her.”

Nikias released her restraints and removed the spreader bar before bringing her over to where Andonis sat in a high-back chair, stroking his cock.

“Put her on her hands and knees, three feet in front of me.”

Nikias placed his hand on her shoulder. She followed his silent commands until she was stationed on all fours with Nikias standing behind her. Her limbs shook with anticipation.

“Does this position excite you?”

Tag Line:  I can have sex with any woman I want. But I can love only one…that one is you.

Mind traveler Chandra Lamar is on the run, not only from her post-catastrophic dystopian government but from a past she can’t remember. Will Chandra go through with the vengeance in her heart or give it up for love in the arms of the Nodin men or does her Phantom Desire forever own her heart?

Mind traveler Chandra Lamar is on the run, not only from her post-catastrophic dystopian government but from a past she can’t remember. A psychic vision pushes her to recall her purpose for being, but it’s a ghost that awakens her desires for a life she fears she’ll never have. Both push her to remember the past because it threatens what she wants in the now; the Nodin men.

Andonis Nodin battles to accept his failures. The heavy burden nearly breaks him when he can’t save a loved one from the grim reaper’s grip and questions his desire for Chandra, the woman he blames for the death around him.

Nikias finds true love with Chandra in his arms, but is desperate to stop her from seeking revenge on a mission he knows is a one way trip.

Ortello knows for them to recapture the love they once felt for each other, he must be willing to let her go. But overcoming his obsession to make Chandra his and his alone isn’t easy.

Will Chandra go through with the vengeance in her heart or give it up for love? Who is the powerful woman in her haunting visions and will those revealing apparitions crumble her world with the Nodin clan? Does Chandra find true love in the arms of the Nodin men or does her Phantom Desire forever own her heart?

Stop by for a visit and leave a comment at http://houstonhavens.wordpress.com