Just a week is not enough time to fall in love, but Fate doesn’t care. Seth’s carefully crafted plan for how his life will go doesn’t include falling in love with a guy in his horrible hometown. He wants to start a new life anywhere but at home. Until Maddox storms in with his multi-colored hair and carefree attitude.

Long distance relationships don’t work and Seth isn’t into gambling with his future. But the more time he spends with Maddox, the more he’s willing to throw caution to the wind. Now his plan for the rest of his life has been turned upside down and seems to include things Seth never thought possible, including a lifetime of happiness in his hometown.

I headed out the door and grabbed the book I started a few days ago out of my car. In high school I would always go to the park and read when it was nice out. My parents were happy knowing I got fresh air, and I was happy just to get lost in the world of whatever book had captured my attention.

I found my usual bench unoccupied. Thank goodness. It sat underneath a giant oak tree that provided a good amount of shade. About a hundred feet away sat a set of playground equipment for kids. Since it was Sunday evening, there weren’t many kids around.

The screech and clicks of skateboards on metal had me looking around like I’d just entered a parallel universe. What the hell?

Where there used to be old basketball hoops with raggedy nets, there now stood a half-pipe and other random obstacles used for skateboarding tricks. A half dozen teenagers and young adults whizzed around each other. Some on boards, others on rollerblades. All of them moving at high speed.

There was a lot of laughing, and every so often someone shouted, “Check this out,” before trying some stunt on the rail, usually resulting in a fall or stumble.

Squealing kids on a swing set I could drown out. But this, I wasn’t so sure about. It was new. And distracting.

One young man in particular stood out. Mostly because he had bright orange hair that spiked in every direction, possibly looking like it could impale a person if they were to touch it. Like a cactus. He also looked a bit older than the teenagers that surrounded him, which might explain why they all seemed to look up to him like he was a god.

He wore a black zip-up sweatshirt, though it was warm enough to go without, and jeans that were skintight.

Once I started watching him, I noticed that the other skaters watched him too. He had talent. He kept his balance well, and his moves seemed effortless. While the other skaters floundered and wobbled as they zoomed around, he kept calm and collected.

I didn’t understand the appeal of skateboarding, especially on a half-pipe. What was the purpose of putting yourself in harm’s way like that? Might as well throw myself down a flight of stairs if I wanted to break a bone.

Orange-haired Guy stood on the deck of the half-pipe. He stared down the slope below, his face unreadable. He didn’t call the others to gather around and watch, though I had a feeling they would anyway.

He took a deep breath and hopped on his board.

I held my breath, like I was the one up there. I watched in wonder as he gained momentum, back and forth, up and down the half-pipe. Once he had enough speed he began his flips. It looked amazing to me. Him flipping in the air, his feet staying on the board as he spun, then landing perfectly to do it all over again. I guess I had never bothered to watch any skateboarding before. Maybe I would have if they had looked like this skateboarder.

My nose pressed against the chain-link fence that surrounded the skate park before I even realized I had walked closer. At least I started breathing again.

He stopped just as quickly as he started. Landing back on the deck of the half-pipe, like he hadn’t just done something incredible. And maybe it wasn’t to him; maybe that was just another day in the life. To me it was pretty cool.

The other skaters around cheered and gave him high fives as he made his way through the park. Just like that, he left. He hit the sidewalk and hopped back on to his board, flying down the street like it was made for him.

I snapped out of it. What the hell just happened? I don’t gawk. I never gawk.

I rushed back to my regular bench, picked up my book, and headed home, no longer in the mood to read. At least not outside. At home inside my room there wouldn’t be any distractions. Visions of the orange-haired guy floated through my head, and I couldn’t shake them. I blamed the jet lag.

Never mind the fact that I didn’t fly home. Nor did I go through any time zones. Traveling had tired me out, and I wasn’t thinking straight.

Just a week. Then I would be back where I belonged and where things were normal. Routine. The way I liked it.

Jena Wade began writing in January of 2013 as a New Year’s resolution and so far she has stuck to it.

Jena lives in Michigan with her husband, two dogs, and one brand new baby boy. By day she works as a web developer and at night she writes. She was born and raised on a farm and spends most of her free time outdoors, playing in the garden or tending to her landscaping.

Today I have critique group friend and now fellow Liquid Silver author, Jena Wade, visiting with a taste of her latest release, Mechanically Inclined. So exciting! This looks seriously sexy, too. 🙂

Cal Foster has sworn off men. He is never going to date anyone again, ever. But as the saying goes, never say never, because Josh Gibson isn’t just anyone. Jena Wade brings you all the passion you could hope for in her hot, new contemporary romance, Mechanically Inclined. 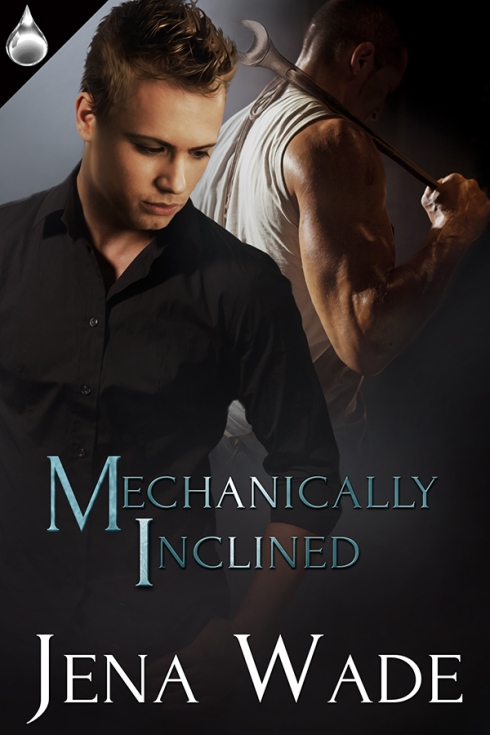 Josh rolled up the sleeves on his teal dress shirt and flipped his tie over his shoulder. He took a deep breath. This needed to go fast if he was going to show up on time. Was there a certain way to take the bolts off? He couldn’t remember. It’d been a long time since he’d actually had to do this. It looked easy enough.

Ten minutes later, Josh had four of the five lug nuts off. The last one was causing him trouble. He placed the tire iron on the bolt and pulled with as much strength as he had left in him. It didn’t budge.

“Need some help with that?”

“Christ!” Josh let go of the iron and landed on his butt in the dirt. “Holy hell, man. Where’d you come from?” Maybe it was because Josh was on his back, but the guy looked huge. He loomed over him. A full dark beard covered his face, and his white button-down shirt stretched tight across his wide chest and muscular arms.

Did he hit his head when he fell? His dream man stood before him. Josh had been looking for the perfect man all his life. What were the odds that Mr. Right would show up on a country road in the middle of a cornfield?

Add it to your Goodreads here.