Cover Reveal Charley Descoteaux’s “The Pinch of the Game”

Being a witch doesn’t mean one can beat the devil forever.

Jeffrey Overton, unemployed IT professional turned poker player, pushes his luck once too often and runs afoul of the host of an illegal card club. The man sent to escort Jeffrey to a “meeting” about his supernatural winning streak arrives at Jeffrey’s crappy North Portland apartment, lock-picking tools in hand and a charm to block Jeffrey’s magick.

Head muscle for said host, Mike Wells, is a Daisy from Daisyville. He isn’t a witch. What he lacks in magickal talent he makes up for in brawn, so he doesn’t expect the guy he’s after to overpower him. But once Mike renders Jeffrey helpless, he’d rather seduce him than bring him in.

Jeffrey and Michael ditch the “meeting” and end up hunting some of the same people they ran from, trying to get Jeffrey back into his own body. And that’s only part of the adventure. The pair travel halfway across the country on the quietest road trip in history and find missing people, empire-building witches, and maybe even the families they’d both thought lost to them.

If Sal had sent someone after me, a short trip up to Seattle might be a good idea, maybe even BC. That called for some new clothes, so I grabbed my battered gym bag—my quick escape kit—and was almost home free when the kitchen door burst open. It would’ve been dumb to turn off the light when the goomba first went to work on the lock—I can’t see any better in the dark than your average Daisy, not when I’m blocked. Once that massive body filled the doorway, I wished I had. Wished I’d done something.

He hesitated, barely a moment, and I bolted for the front door. He grabbed me before I made it out of the kitchen and pinned both of my arms to my sides. It wouldn’t work, I knew that, but I still tried to burn his hands. All I needed was enough time to—fuck, is he laughing?

“Give it up, pretty boy. You’re blocked.”

The big man pushed me against the wall face-first and pulled both hands behind my back.

He pushed me flat against the wall, and the rest of that sentence disappeared in the rush of air he squeezed from my lungs. I couldn’t help being turned on, even though pain and domination usually aren’t my thing. Neither are bears, but underneath the padding he felt nice and solid, leaning full against me. He tightened a plastic zip tie around my wrists with shaking hands. And then he held me there.

Don’t you want to see this cover? 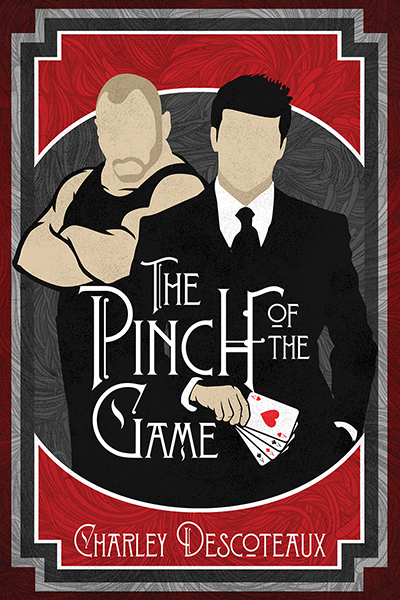 Charley Descoteaux has always heard voices. She was relieved to learn they were fictional characters, and started writing when they insisted daydreaming just wasn’t good enough. In exchange, they’ve agreed to let her sleep once in a while. Charley grew up in the San Francisco Bay Area during a drought, and found her true home in the soggy Pacific Northwest. She has survived earthquakes, tornadoes, and floods, but couldn’t make it through one day without stories

Charley has a $10 gift card giveaway as well as a backlist book she’ll send to a lucky winner: