The lovely Heloise West has a book coming out tomorrow! I was lucky enough to beta read Hitting Black Ice a while back, and I can confirm that this is a fun, action-packed love story you won’t want to miss.

Heloise is visiting a number of blogs with excerpts from her release. Today she’s giving us Chapter 1, Part 2. To check out the previous excerpt, head over to Skye Jones’ blog. 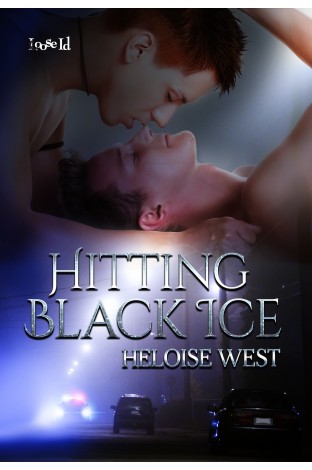 Violence spills into the local ER, catching Hunter and Shawn in the crossfire. In the aftermath, buried passion explodes, pulling them into a hot encounter that leaves both men wanting more. Each man has good reason to keep his distance, but when the past catches up with Shawn, they must run for their lives.

At least they’re running together….

When the tide of emotion and memory finally washed through him and left him able to speak again, he said, “I’m not suffering here.” He kept much of the darkness at bay with whiskey and anonymous sex. Who needed Prozac with a warm, muscled body in the bed?

“Maintaining.” It had been a far prettier day in May, almost nine months ago now, when he’d walked out of the ER in Boston to Jerry waiting for him in the parking lot with a gun.

“Ask him out on a date. An old-fashioned date where, at the end of the night, you kiss him good night.”

“Don’t get angry.” She patted his hand.

He whipped it away. “Too late.”

Marisa sighed. “I’ll make it up to you. Toni, Anna, and I are going to Twisters tonight. I’ll buy you a drink.”

Hunter gathered up his tray. He liked the ER crowd. They always had fun when they got together off work hours, and he agreed to meet her at Twisters before hitting the clubs.

When his shift was over early that morning, he went back to his apartment and crawled into bed as the day glowed behind the blackout curtains. The end of the week had left him exhausted, and his sleep was blessedly dreamless.

On Monday, a little after seven in the morning, Hunter stood in the open ambulance bay as the cold wind between the buildings whipped bits of paper trash and new snow around. A hard blast slapped at his head and pushed a flap of hair into his eyes.

“Should shave my hair off,” Hunter said to Marisa.

His friend was smoking a cigarette despite constant harping from Hunter to stop. She smoked only one or two a day, she said, escaping her husband and kids to step out into their backyard to light up or, like now, at the end of her shift.

“Don’t you dare.” Marisa exhaled a final plume of smoke mixed with the pale steam of her breath. She dropped the butt and ground it out beneath her thick-soled shoe, then picked it up and flicked it unerringly into the bin at the hospital entrance with a smile. They weren’t supposed to smoke on hospital grounds, but it was too dangerous to go off campus and into the neighborhood.

A man pushed through the doors of the ER.

“Here’s our Shawn,” Marisa said in a low voice.

“He’s not ours,” Hunter said blithely. “He’s someone else’s.”

“I did, after you left. He turned me down and told me he was with someone.”

Shawn had dressed for the February weather in a gray hoodie under a black denim jacket and a Red Sox cap. He had a long, loping stride and stood about an inch taller than Hunter. He tipped his face up from under the bill of the cap, caught Hunter’s eye, and smiled.

“The hell he is,” Marisa muttered.

“Hey.” Hunter smiled back because he couldn’t help it. He’d avoided Shawn most of the night shift and planned on going back to an earlier dinner time for the rest of his life. Yet he missed seeing Shawn. The hookup he’d taken to his bed last Friday night and who’d spent the weekend hadn’t made him feel like this. They’d had some laughs, yet Hunter had been relieved when the guy left. Hunter’s heart skipped a beat when Shawn stopped and said hello to Marisa, then turned to him. Something fizzy and sweet bubbled in his veins, tingling under his skin. His heart stopped its aching as if a morphine drip were in that smile.

“You’re angry at me?” Shawn’s pale brows shot up into his forehead.

His blue eyes kindled with relief. “You didn’t have dinner break at your usual time.”

“No, I didn’t. I—” Hunter turned to Marisa, but she only smiled, I told you so in her eyes. He made himself look back at Shawn. “I’ll be there tomorrow.”

Shawn’s smile widened. “Okay, good.” He looked up at the sky and the gathering clouds. “Feels like spring will never get here. February must be the longest month of the year.”

“Aren’t you cold? You don’t have a winter jacket?” Marisa scolded.

Hunter and Marisa watched Shawn walk down K Street. He put his hand on top of his cap to keep the wind from taking it and pushed the other hand into his pocket. As he turned at the corner and out of sight, he left Hunter with the impression he was lonely and cold.

Hunter didn’t like to leave until Marisa’s husband arrived with their two small girls to pick her up. She opened her mouth to answer, but three gunshots blasted out into the low hum of traffic.

“Shit,” Hunter said. The shots had come from the same direction Shawn had gone.

The next installment for Chapter One of “Hitting Black Ice” will be on December 2, 2014 on Kate Lowell’s blog, for the Tuesday Tickle.

Thanks for having us here today, Kimber! 😀

You can find me here:

Author of romance of all stripes. END_OF_DOCUMENT_TOKEN_TO_BE_REPLACED
This entry was posted on Monday, December 1st, 2014 at 12:06 am and posted in Uncategorized. You can follow any responses to this entry through the RSS 2.0 feed.
« Kiss My Ash by Renee George Release Day #Giveaway
It’s My Birthday and I’ll Waste Time if I Want To! »