Today I have the always steamy Eva Lefoy here to give us a taste of her latest release, Kink Club Blues. 🙂

If you love the kink, you know it. That’s the case with Geoffrey in Sex, Ties and Videotape. He knows what he wants, but his partner, Brian, won’t give it to him. In fact, he goes so far as to ridicule poor Geoffrey for his needs. As you can imagine, that’s not good for their relationship.

Then Brian’s friend Paul steps into the picture and Geoffrey gets exactly what he needs. Yay! Paul and Geoffrey take off to Paris to celebrate. But… what about Brian? What happens to him?

In Kink Club Blues, we find out – or should I say, Brian finds out – who he really is. Turns out he only thought he was a top all this time and in reality, he’s a sub, just like Geoffrey. Who teaches him this? The super-sized hunk-o-man and kink club Dom, Gar. Here’s a photo of Gar looking cutely no-nonsense. Yep, Gar is the Dom of any man’s dreams. But for Brian, he’s one big dose of reality! 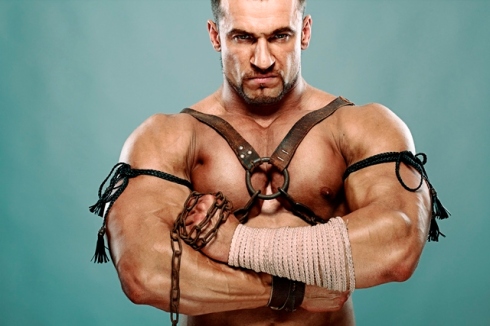 Paul and Geoffrey return from their special trip to Paris. Paul plans to propose to Geoffrey but first, his urge to protect his lover drives him to close an old loophole. He visits Brian, demanding the original video he made of Geoffrey be destroyed.

Brian doesn’t understand what Paul’s upset about, or his dominant streak. But the clearer Paul’s feelings for Geoffrey become to him, the more Brian desires to have a man love him the same way. Curiosity draws him to the local kink club, and into the arms of a man whose punishment gives him all he secretly craves.

A mountain of a man appeared before him, and he immediately stopped struggling, as though someone had pushed his obedience button. Gar.

Brian bit his lip. Behind him, he heard Paul going on about the video. Tattling on his former bad choices, making him sound like an ass. He watched Gar’s eyebrows lower and his lips frown.

Gar stepped closer, waving the security guards off. The man exerted a pull on him he’d never experienced before. He stood there mesmerized, as Gar towered over him disapprovingly.

“No.” He shook his head emphatically. “It was a mistake. I didn’t mean it. I didn’t know.” If he could only explain. More than anything, he hated the thought of Gar thinking ill of him. The desire to prove himself worthy, be accepted by Gar ate at him hard.

Gar eyed him curiously for so long Brian thought he’d turned to stone. “What did you really come here for tonight, Brian?”

Brian sucked both his lips in, trying not to whimper. His body surged with unfulfilled desire, and he unconsciously leaned toward Gar as though snagged by his orbit. But admitting what he wanted out loud, what he wanted Gar to do to him, frightened him even worse than Gar’s rejection.

Gar stepped closer so they were toe-to-toe. His hot breath fanned Brian’s cheeks. His gaze burned a hole through him, but his voice was soft and low. “Did you come here to get punished for your misdeeds, Brian?”

His cock leaked, his hips thrusting forward of their own accord. He fought valiantly, but in the end he could not resist Gar’s commanding presence. He licked his lips. “Yes. Oh God, yes.”

Gar’s gaze went from Brian’s cock to his face. His smile was ferocious, as though he’d eat him alive and lick him up. His fingers came to Brian’s neck and pinched.

Brian thrilled at the look and passed out at Gar’s feet.

Eva Lefoy writes and reads all kinds of romance, and is a certified Trekkie. She’s also terribly addicted to chocolate, tea, and hiking. One of these days, she’ll figure out the meaning of life, quit her job, and go travel the galaxy. Until then, she’s writing down all her dirty thoughts for the sake of future explorers.

Author of romance of all stripes. END_OF_DOCUMENT_TOKEN_TO_BE_REPLACED
This entry was posted on Friday, May 30th, 2014 at 12:05 am and posted in Uncategorized. You can follow any responses to this entry through the RSS 2.0 feed.
« Cover Reveal: Uriel’s Fall by Loralie Hall
Hot Summer Flash Blog Hop »