It’s that time again–out with the old and in with the new. Year, that is. I don’t know about you, but 2013 was not my best twelve-month period. Given what I’ve gathered from countless others on social media, it hasn’t been kind to many folks out there.

Well, I raise my champagne flute to 2014! Been looking forward to her, in fact. My Chinese horoscope predicted ’13 would blow, and not the good kind. 2014—the year of the horse—promises to be miles better for a rabbit like me.

To celebrate a new beginning and better times, I’ll definitely ring in the new year with a kiss from my sweetie. Today, I share a fun song about a fantastic kiss, and I give away a copy of either my novel Star Catcher or Forever is Now—winner’s choice (if you’ve read both, I’ll find you something else). A random commenter will be selected via random.org. Don’t forget to include your email address, because the lovely Gemini Girls are giving away a $25 gift voucher for Liquid Silver Books!

There you have it—Elvis kisses for the New Year! 🙂

I am the crappiest blogger in the New England area lately. Here’s to hopin’ someone pins a cyber-badge on my ass in honor of my shitastic laziness.

Well, the Christmas season is truly upon me. I’m done shopping, for better or worse–suck it up, children, you’re only getting six gifts per annoying jerkface this year and that is me totally overlooking some terrible behavior. Said kids are now home for a hot week and a half (read: Dear Lord, please help me to not murder anyone and bury him/her in the  backyard–that’s all I really want for Christmas. The ground is too frozen and it would be an awfully hard dig. Hell, I already have a bad back). People at the grocery store should watch how they look at me. I’m an asshole on the edge.

I usually put up two trees–a grown-up tree I put all purple, green, and blue ornaments on, with white lights and a silver garland, and a kid’s tree they can decorate with all their crappy kid things (within reason–there is still a red and blue theme involved, and I do move/remove ornaments that are not up to Kimber code).

This year I conveniently “forgot” about the kid tree and no one seemed to notice.

I also haven’t done real Christmas cards for a few years now. I still get them from old work friends and relatives, but I quit a while back. My husband gave me shit the first year and I was all like, ” Here’s the gargantuan list. Have at it, if it’s so important to you.” Needless to say, it didn’t happen.

My grandparents still get a hard copy–they are almost ninety and obviously not of the internet age. Everyone else gets an e-mail/Facebook picture of my kids with a holiday message for health and happiness, like my typing that will make it so. Like they give a shit. I doubt it. I mean, I’m still getting cards/pictures from people, and if they aren’t on Facebook, it’s interesting to see which parent the kids are looking like this year, but otherwise, it’s a colossal waste of money and trees. Also energy. Lazyass Scrooge that I’ve become, I couldn’t possible dedicate hours to Christmas cards.

Anyhow, anyone out there care to out-Scrooge me?  I’ll give the Scroogiest commenter an e-copy of my novelette “Bound by Ink.” Well, I can’t be all bitch if I’m giving stuff away, right? Okay, maybe I still can…

I dare you to out-Scrooge me!

On an alternate Earth, Key has his marriage ink placed out of duty to his friend, Kaya, but realizes his mistake too late. He runs from the woman and her family, desperate to find a happiness that is sure to elude him in his village full of narrow-minded people. In the wilderness he discovers Dax, a man who left their tribe to seek his own freedom. Lust sparks between them, but with Kaya’s father on the hunt for Key, and Key’s own guilt plaguing him, will the two fugitives be able to find their happily ever after?

The 12 Days of Christmas According to Chance Ralan

The 12 Days of Christmas According to Chance Ralan

My rocker Chance Ralan from “Forever is Now” wrote a revised 12 Days of Christmas for his man, Alex.  It’s a dirty little ditty, as you may imagine. Stop over to Scorching Book Reviews and check it out. While you’re there, do the Rafflecopter thing for a chance at a $50 gift card. 🙂

Sofia Grey stopped in today for her “A Handful of Wolf” blog tour. She’s giving away three copies of her new book to three random commenters at her stops, so don’t forget to throw your hat in the ring!

Take it away, Sofia! 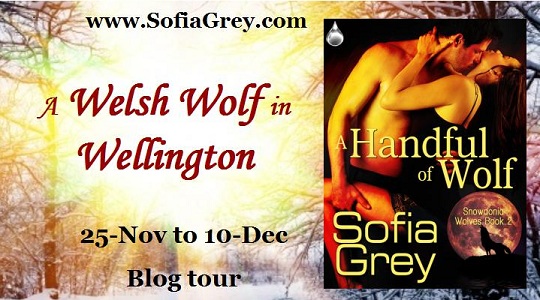 The Wild Side of Wellington

Since most of Sasha’s story takes place in Wellington, the compact and thriving capital city of New Zealand. I though it would be fun to feature a different part of the city – especially those mentioned in the book – on each tour ‘stop’. Come and join me on a truly unique virtual tour of Wellington J

I never explain where you’d find the headquarters of the Wellington Wolf Pack, but that’s because Connor, the Alpha, wants to keep it a secret. He chooses to meet Sasha in an anonymous back street bar, and Sasha is also none the wiser.

However, if I had to hazard a guess, I’d place it in the green, wild hills above the suburb of Karori. It’s wild and open enough for their wolves to roam in safety, and remote enough to avoid human interaction.

Wellington is at the southernmost tip of the North Island (because as you know, NZ is made up of two islands) and even though parts of it are still rugged and sparsely populated, it’s the South Island that has remained largely wild.

There’s a 175km track through the Fiordland Coast that claims to be the longest stretch of walkable wilderness coastline. Its isolation and difficulty of access has meant that the coastline’s raw and wild beauty has remained unchanged since pre-human times. That’s definitely somewhere you’d find shifters.

In this extract, Sasha is clubbing with Megan and her friends when he hears a worrying rumour:

“It gets you like that, aye.” Lou’s words made no sense. He flicked her a glance, unwilling to look away from the bathroom door. Did she know? Nah, must be a lucky guess. “The vibe in here.” She gestured to the fingers of smoke drifting on the air currents. “Megan loves it, but it makes me feel edgy. It’s the same for you, isn’t it?”

Yeah, just a lucky guess. He corralled his thoughts. “How do you mean?”

Lou shrugged. “Megan says there’s something here that she feels at home with. I keep imagining we’re going to get jumped by vampires, or werewolves or something.” She gave a self-conscious laugh, her hand rising to her throat. The biker dude had disappeared without Sasha noticing.

“There’s uh, no such thing as vampires.” Could Megan feel the shifters? Is that why he was drawn to her? Could it be that his wolf was simply confused in here?

“Reports in the local papers. Huge dark wolves on the hills. Too many to just be hunting dogs.” Sasha’s heart juddered. One of the fundamental tenets of shifter law was secrecy. If the Kiwi wolves were getting careless, who knew where it might lead.

A Handful Of Wolf is available 25 November 2013, from Liquid Silver Books. 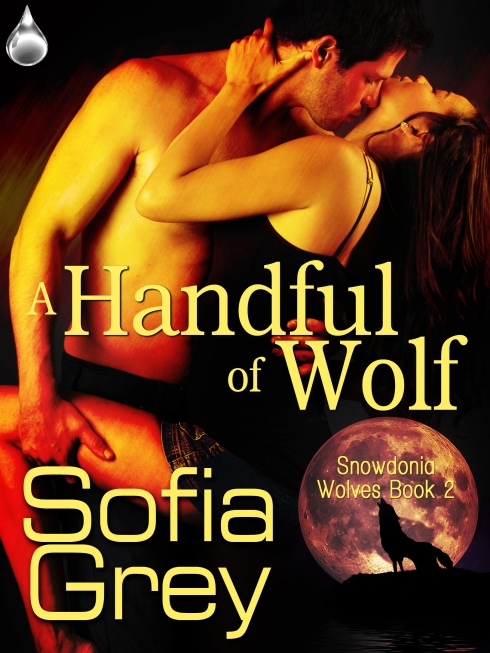 Sasha’s not a looking-to-the-future kind of guy, but he’s made an exception with his plans to travel and meet lots of pretty girls. Too bad his Pack Alpha, fate, and reality have other ideas about his trip abroad. He’s pretty sure he didn’t sign on to be a diplomat for the Snowdonia Wolf Pack. Or to find a Mate. Especially not a human Mate.

Megan knows better than to let a sweet-talking charmer get under her skin, but Sasha’s sexy playfulness is making her forget all her rules. Except one: she’s not willing to risk her heart by falling in love. The gorgeous boy from Wales can only be a fling, especially since her over-protective brothers hate him on sight.

In the midst of a wolf uprising, a hesitant Mate, and Megan’s complicated family ties, Sasha learns that sometimes impulsiveness is dangerous and even lethal. Can he show Megan why they belong together before it all comes crashing down around him and he loses his Mate forever?

I’m giving away 3 copies of A Handful of Wolf, to 3 lucky commenters across the tour. Just leave a comment at whichever site you visit, and you’ll go into the draw. The more comments you leave, the more chances you get to win.

Catch me blogging with Allyson Lindt at http://www.GeminiGirls.com

Romance author Sofia Grey spends her days managing projects in the corporate world and her nights hanging out with wolf shifters and alpha males. She devours pretty much anything in the fiction line, but she prefers her romances to be hot, and her heroes to have hidden depths. When writing, she enjoys peeling back the layers to expose her characters’ flaws and always makes them work hard for their happy endings.

Cyber Monday on All Romance! 50% off and Freebies!

Just a heads-up, folks. In case you’ve been thinking about picking up one of my books (or someone else’s), but couldn’t shell out the cashola, here is your chance to get them at half price!

And there are cyber-tons more! Just look for the books with the little crown emblem on them to qualify for the 1/2 off rebate.

Oh, and Geek Lust has been free over there for a while now, if you need to save all your pennies for the holidays, but still want something spicy for your road trips. 🙂

Also, if you haven’t read my free gymnast and the nerd M/M Sticking It, the download links are here.