I have the lovely Diane Saxon visiting me today to give us a peek at her new holiday-themed romantic comedy, Flight of Her Life. It looks like a super fun read. I can’t wait to get my hooks in it.

Thank you so much for hosting me, Kimber.

No problem!  Thanks for being here, Diane. 🙂

I’m going to be visiting some of my favorite new author friends over the next week or so, and I’d love you to join me in my hop. I’m going to do a consecutive excerpt of Flight of Her Life, my new romantic comedy especially for Christmas, so if you follow along, by the end, you will have read my first two chapters. 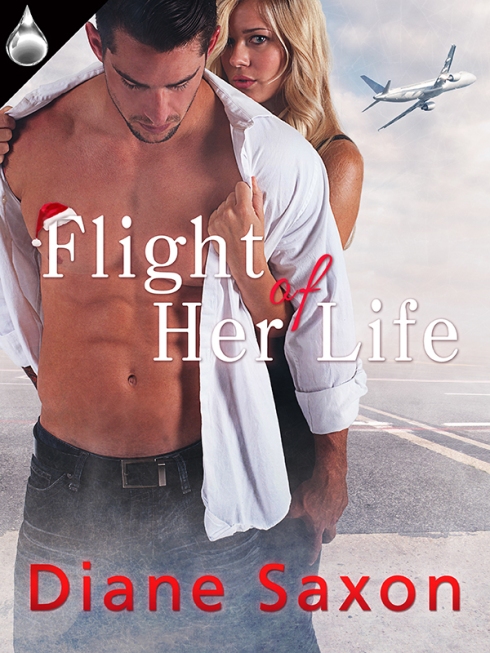 I love life and I laugh a lot. I think that’s why funny things seem to happen to me, so I thought I would do a little competition. The answers will be a pure guess, but I will give away a copy of Flight of Her Life to the two top scoring visitors. You have to answer all the questions on the first 6 sites and I will let you know the answers when we reach Layne, so follow me around. If you miss one out, you can go back, I won’t judge until I put the answers up on the 9th.

Look forward to seeing you around.

Traveling from New York City to Houston to meet her future in-laws and announce her engagement, accident prone Bailey finds herself in a situation beyond her control. All flights are cancelled the night before Christmas Eve, leaving Bailey stranded at the airport with a cowboy from her past.

Against all odds, Sebastian manages to rescue Bailey from one disaster after another, but is it too late to rescue her from her future? Faced with a heartrending dilemma, does Bailey turn her back on the man who offers her a life of security, or does she run off to Maui with a cowboy?

“Do you mean ʻpardon?’ That’s the polite way of querying what a person has said.”

“What did I just tell you?” Her pulse rate increased and she widened her eyes as she heard the impatience in his voice.

“Oh. Umm.” She watched his brow crease in irritation, and automatically straightened her spine as she sat opposite him in the fortieth floor offices belonging to Horton & Horton Attorney at Law.

“You are going to fly to Houston this afternoon.” She recited. “To meet with your parents…” at his sharp look, she corrected herself. “…the senators.” He gave a short, sharp nod. “I will stay here for another two days to attend to matters that may arise in your absence.” She self-consciously checked for a stray curl and patted her hair above her ear. “I will then catch a flight to Houston to join you and the senators for their Christmas Eve party…soiree.” She quickly amended before he could react. “My parents have made their own arrangements to attend.”

She linked her fingers together and resisted the urge to cross her legs. Phillip said it was considered vulgar and cheap, and God forbid anyone thought she was cheap.

He seemed to be waiting for her to continue. She closed her eyes briefly, took a deep breath and thought.

“Oh, yes. Senator Patricia Horton…” she glanced up at him to see if it was okay to use his mother’s first name in that manner, but as there were no flickers of disapproval, she continued. “…will show me the dinner service she has chosen.” For us to use for the rest of our lives. “And Senator Benjamin Horton will announce our engagement and the date of our forthcoming wedding—once they have agreed on the date with you later today.” Her smile was pure saccharine as she waited for his nod of approval.

He snapped his briefcase shut and picked it up, casting a distracted glance at her.

“I’ll see you on Christmas Eve. The senators’ car will meet you at the airport.”

She stood and crossed the room to offer him a kiss good-bye. Reaching up on tip-toe, she leaned in to him. He stepped back so she almost overbalanced and he turned his head just enough for her lips to graze his cheek, and then he raised his hand and wiped the spot she had touched.

A low wave of disappointment flowed over her. She appreciated his ideas about work etiquette, but really, he was leaving for two days and the next time she would see him would be in a room full of strangers at their engagement party. A nasty little thought curled through her mind as she wondered if he would deign to kiss her in front of everyone there, when he so obviously seemed to find difficulty in the privacy of their own office.

“Oh. My mother had this delivered.”

Curious she dipped her head as he pulled a small, elegant, jeweler’s box from the inside pocket of his impeccable suit and flicked open the lid. The light reflecting from the huge diamond rock almost took her eye out. Her jaw dropped.

“Phillip. It’s…stunning.” She couldn’t form the words she thought would be most appropriate to describe the monstrosity of a ring he offered her.

He handed the box to her with the ring inside.

“Don’t lose it; it was almost two million dollars. A nine carat diamond. The senator has exquisite taste.”

Speechless, she stared at it for a moment, taking time to consider what dinner service the senator, with her exquisite taste, would choose. Not for the first time, a flicker of concern tiptoed secretively through her.

Phillip stepped away and opened the door. As though an afterthought struck him, he turned back, and her heart gave a hopeful flutter.

“And Bailey, would you do me a favor and wear your glasses rather than your contact lenses? They make you look so much more…”

“No, Bailey.” His mouth pursed with irritation. “Presentable. They make you look more presentable.”

The door snapped shut and she stared at the enormous stone glaring out of the box at her. If anyone asked her what her opinion of vulgar was, she would have said the ring.

She took it out of the box, reverently slid it on to her ring finger and held her hand at arm’s length. The ring was too big and as she dropped her hand down to her side the rock spun to the underside of her finger. Perhaps it was safer tucked into her palm anyway. She was likely to get mugged, flashing something like that around in New York City.

She gazed around the office, sighed as she noticed the paperwork he had left in a neat pile on his desk for her to clear away. She was supposed to be an associate, not his secretary, but he’d got into the habit of letting her clean up after him.

Bailey picked up the envelope with her flight ticket inside and tucked it into her handbag.

She needed to leave early to buy Christmas presents for his parents. She thought Phillip and she would have bought them between them, but Phillip said he’d already got them something from him. What the hell would they want for Christmas if they could afford to spend two million bucks on a diamond ring?

She already had presents for her own parents. A pretty silk scarf for her mom and a box of Cuban cigars for her daddy, but really what would the senators appreciate from her?

At least she was going to see mom and daddy too. They were staying in Houston for the engagement party. She missed them so much it made her heart ache.

Bailey needed to pack her case with smart, presentable clothes. She wasn’t sure if she had enough for an entire week: items that were neither work suits, nor were they jeans and sweaters.

She locked the office door and hustled along the empty hallway to the elevator, most employees had already left for the Christmas holidays. She pressed the button for the lobby and waited, and then she stepped inside the elevator where the annoying sound of piped Christmas music greeted her. The familiar feeling of nausea hit her as the elevator lurched down and her stomach stayed on the fortieth floor for a moment longer before it decided to join her.

The lights flickered, the Christmas music stuttered, the elevator ground to a halt and the doors remained closed. Bailey leaned forward, a heavy feeling of disbelief filled her chest. Please don’t let this happen. Not now, not today. She pressed the button for the door and stared in horror as they slid open to reveal a solid brick wall in front of her. The elevator was stuck between floors.

Where to Buy Flight of Her Life

Authors I am visiting:

Love it! Thanks so much for the fun visit, Diane!
-Kimber