I have TD Hassett guesting on my blog today.  TD is a fellow Liquid Silver author whose book Isabel’s Awakening is available now.  She’s here to tell us about her decision to write.

Hi, TD!  Thanks for visiting!

Thanks for letting me stop by today! I don’t get out of my office nearly as much as I would like, at least not for fun stuff like talking about writing.

I only took up writing very recently and it was kind of a fluke.   I teach a SAT prep class, among other things, and oddly enough was inspired to start writing by one of the students in that class.  She was an inner city teenager with more baggage than I’ve ever come across. This girl is a smart kid with a ton of charisma.  Often times I would catch her on the computer typing away but not about what was assigned.  I’d try and redirect her and she’d say, “Miss, I can’t do that, I’m writing my novel.” I would get her to do a little bit of the class work and then she’d be back at her writing.  It was both frustrating and inspiring. I went home and reflected on this student’s determination to write and it was contagious.

I started a book that evening and by the end of a week had  forty pages written.  It was slow going, but whenever I wanted to give up I just thought about my student who kept writing despite all the very real roadblocks life had thrown at her.  What was my excuse for quitting?  Could I really give something up because I had some writer’s block or was too busy?  What would I be too busy doing at nine at night?  It took me 6 months to get a polished draft ready to send to the publishers for consideration but it was worth it. I got plenty of rejection letters but finally three publishing houses offered contracts and I chose  Liquid Silver Books because the acquisitions editor  reached out to me with all kinds of support and encouragement.  I waited until I had a contract to tell my family and friends (and that inspirational student) that I had been writing.  I suppose I was afraid to let them know about the writing for fear of it not being ‘good enough’ whatever that means.  I can happily say that I am still writing and enjoying some wonderful support from friends, family and fellow writers.

T.D. Hassett  grew up reading the romance greats, Jackie Collins, Julie Garwood and Judith McNaught.  She was certain that life should be like a romance novel, lots of passion, some incredible adventures and a guaranteed happily ever after.  She attended college in New England earning a B.A. in history and a M.S. degree in clinical psychology before changing her mind again and studying education.  Currently Ms. Hassett lives in Connecticut with her very patient husband and two young children.  Her rambunctious family shares their home with 3 crazy cats and a darling golden retriever named Delilah.  Her eccentric relatives and their quest to make her feel like the only normal nut in the family tree inspire her writing. 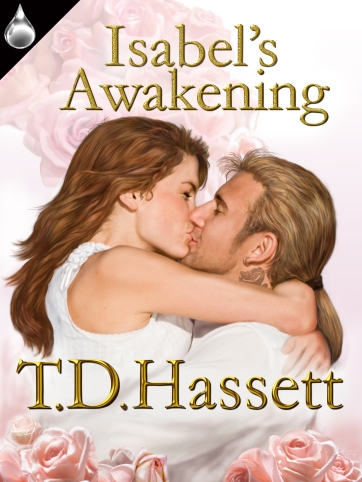 It’s been five busy years, and Newcastle-born singer/guitarist Thomas Morgan is still punishing himself for his younger brother’s death.

Thomas’s young, fashion-model wife once led her husband’s idolizing brother, Chris, into both drugs and an adulterous relationship. The loss of his brother and total destruction of his marriage destroyed Thomas. To avoid entanglements with others, even his young son, Thomas focused on promoting his music and the management of his now highly profitable record company. He thought he had everything at a safe distance, at least until Isabel literally slammed into his life.

Isabel struggles to navigate her newly stirred passions with her rising academic career and independent nature. As the sex sizzles, the two lovers will have to decide which parts of their dreams they will sacrifice for their fledgling relationship.

Can Thomas ever trust and love again, and will the young woman he meets ever have the confidence and strength to be with him?

It was well after midnight, and Isabel felt the buzz of concert beer and party wine. Thomas had been working the room steadily and checking back to ensure she was chatting happily with a group. She saw him cornered with a radio show producer he’d introduced her to earlier. Thomas had a tortured expression on his beautiful face. She finally understood why the whole band didn’t show up at these things.

The ladies she’d been chatting with were working up a sweat on the dance floor, and part of her longed to join them. The rational side won out. She really couldn’t dance and preferred others not to know how clumsy she could be, especially after a few drinks. Isabel parked herself by the bar and prepared to enjoy some people-watching. She couldn’t believe how packed the place was. She did meet some really nice people and only got snubbed by a few drunken idiots who must have been trawling for celebrities. Part of her was disappointed it was time to go when Thomas returned from his latest round of shop talk and asked if she was ready to head out.

Thomas escorted her to the elevator while tapping out a message on his iPhone. He was letting the hotel’s driver know they were ready to go and where to meet them. They stepped into the mirror-lined elevator and headed down to the lobby level. Suddenly, Isabel was nervous, and not in a front-door-kiss-or-no-kiss-end-of-the-date sort of way. She hadn’t had the talk with herself about this date because it just all sort of happened. She had really expected just to go to the show and then be home by ten thirty, reading thesis notes and petting her cat. Even at the backstage party, she’d still thought she’d get to chat with him for a few minutes and then be dismissed with the rest of the hordes. Why did he want to be with her when there were so many other girls? Insecurities washed over her.

Thomas overwhelmed her. He was so out of Isabel’s little world. On Monday, she would teach the Crusades to disinterested seventeen-year-olds, and he would be many miles away somewhere, crooning out megahits to a stadium filled with adoring fans. Oh my God. What was she even pretending to do?

Her disparaging thoughts suddenly flew totally out of her head. Thomas looked right into her eyes and stroked her lower lip.

“You did great tonight. I’m really glad you came,” he huskily whispered. Before she could ask for clarification, he continued. “I saw you talking and laughing with the staff from Marketing and Planning, and I liked that. In my line of work, you get a little sick of people always brown-nosing the celebrities and forgetting who’s responsible for the whole fuckin’ operation.”

It sounded as though he was about to say more, but the elevator jerked to a stop, and the lights went out, only to flicker back on seconds later. Must have been a power surge and the backup generators were kicking on.

Isabel stared back, wide-eyed and openmouthed. He leaned closer, and without any further hesitation, his lips met hers.

This was a kiss, a real, soul-sucking and tongue-sliding-over-her-lips kiss, the kiss of all kisses. Oh my.

One of his hands slid from her jawline to the back of her neck and pushed her lips into harder contact with his own. The other hand gently tugged her jaw down so her mouth opened slightly. His tongue slipped into her mouth and tickled her inner lip. He swirled his tongue around and caressed hers. She tasted the heady mix of wine and good stout on their mingling breaths. Before she could stop herself, she let a little moan escape. Their mouths became even hungrier for each other, and she pressed her breasts to his chest. He nibbled her lip a bit and then resumed the dueling of tongues deep in her mouth. The hand on her neck dropped down and gently squeezed her ass, pushing her harder into him. She felt his erection against her lower belly, and very wicked parts of her longed to pull his leather pants down and stroke him. Isabel rolled her hips against him and was rewarded with a wonderful growl.

He slid his hand up her clingy tank top and cupped her breast. She wanted more. Her breasts swelled, and her core became soaked with just the rhythm of his tongue in her mouth, sliding in and out and around. His slender fingers slid their way under her bra, and finally, he stroked one engorged nipple. The blood in her body flooded to two very special spots.

Isabel strained against his fingers, wanting him to pinch and stroke her nipple more. Hell, she wanted him to slide his other hand up and play with both breasts. He ground against her, and she responded with animal like mewling noises. This was not the teacher her students would even realize existed.

The elevator shook and resumed its downward journey, jolting both of them apart. Cool air flowed against her heated skin, and they each took a deep breath. Thomas stepped sideways a bit. He smiled like a male model and said simply, “Wow.”

She couldn’t help replying, “Wow to you too.”

You can find Isabel’s Awakening at Liquid Silver Books and Amazon.

5 responses to “Deciding to Write”